Skip to content
Home » Raising Alpacas » Color Genotyping of Alpacas: What We Are Learning

In early 2021, Lynn Edens of Snowmass Alpacas and Jason Gill of Cotton Creek Farms began using an alpaca coat color genotyping test to better understand the base colors of our alpaca herds. They hoped this data would impact our breeding decisions and the ultimate outcomes of our breeding programs. Both have been thrilled with the results, and as a bystander, it has been amazing to watch the discovery and collaboration unfold.

Their findings have made a major impact on the operations of both Snowmass Alpacas and Cotton Creek Farms. The genetic data, and the information it brings to light, has truly impacted who we breed, how we breed them, and how we present these alpacas to clients for sale.

Lynn gave an update on these efforts in a live presentation at the Parade of Champions Auction in early June. Below is a web-friendly version of this presentation. You can find the original presentation in PDF form on the Snowmass website.

Why We Decided to Test Alpaca Color Genotypes

Before We Tested Our Alpacas We Thought

“Grey” indicates the presence of a homozygous-lethal mutation in the KIT gene that, when a single copy is present, produces a tuxedo grey phenotype visible in animals with darker coats. It does not capture the genotype of a modern grey, or roan. It is also possible that mutations other than that tested for can produce a tuxedo grey phenotype.

The vicuna ancestor of alpacas was probably the same color as these modern vicuna – brown with a white ventral pattern. This color is presumably the “wild type” color, represented in our test results by ”EE AA”. Over time, breeders have selected for gene mutations that produce other colors.

If the non-black ASIP ”A” test result was capturing both a brown and a lighter type ASIP mutation, we would expect see some evidence of both in the chart below. But we only see evidence that “A” represents a wild-type color. This makes it harder to argue that there is a light-type ASIP allele present in our sample group. 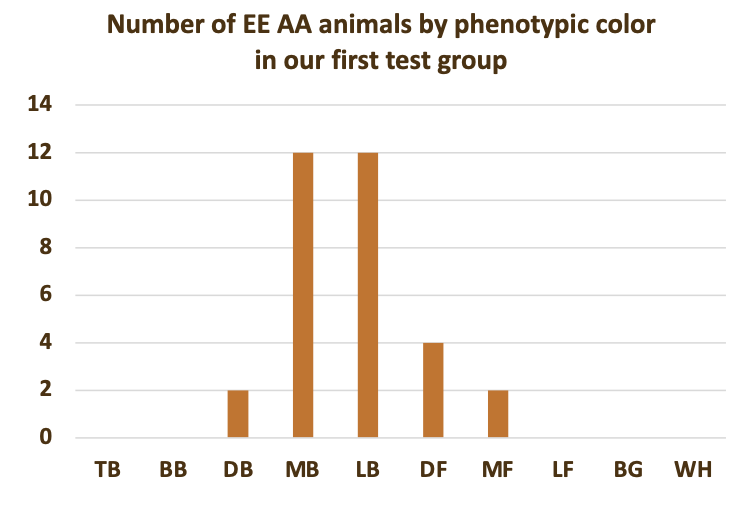 This May Be A Better Representation of ASIP Genotypes

These are tested genotypes.

Relationship Between Depth of Color and MC1R Genotypes

For most phenotypic colors, the ASIP genotypes are on average lighter for animals with no MC1R dilution mutation present than for those with one. This association was statistically significant for the phenotypic colors for which we had sufficient data in the first group.

One Other Way To Look at It

Within Our First Sample Group, Percentage of Animals Carrying Zero, One, and Two Dilution Alleles by Phenotypic Color: 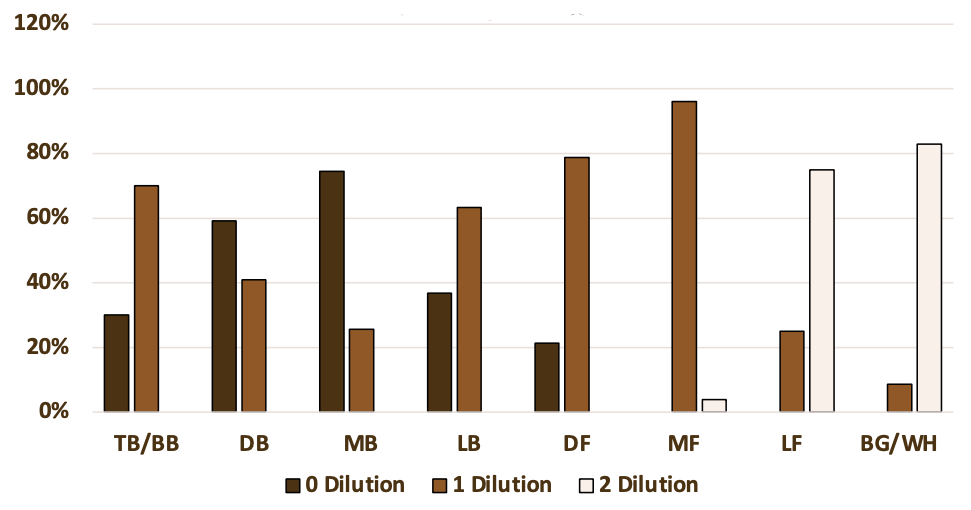 A Rough Guide To Expected Average Depth Of Color For Different Genotypes, Based On Our First Round Of Testing:

Using this Data in the Current Breeding Season

There is Still a Lot to Learn

Thank You to Participating Farms

Thank you to all the farms who have participated in the process! Your willingness to share your genotyping data has helped the alpaca industry grow in knowledge and improve our collective breeding efforts.

2 thoughts on “Color Genotyping of Alpacas: What We Are Learning”